Soumadeep is a software professional and has spent considerable time delving into the world of fine arts. Currently, he resides in Bangalore with his family and is pursuing his interest in music with a band of his own.

Fine arts was not one of my areas of interest. Can’t say for certain whether I still understand or perceive it but staying at YMCA, Calcutta – and the constant exposure to people that were naturally gifted to appreciate art, did raise my interest quotient for finer things in life and so I too acquired a taste I must admit.

The initial few months at YMCA were more of getting through the daily chores – it was mostly eat-work-sleep and the cycle seemed to have repeated itself over and over again. With a few exceptions of course, hitting the movie theatres on weekends, listening to music, reading books or the not so exciting, cleaning our rooms. And on one such lazy weekend my roommate – Nandi and I decided to clean ours and ended up with lots of old magazines, a dead lizard, a pile of fine dust – which, needless to say were of no use to us!

Nandi, had come to Calcutta around the same time that I did and was completing his MBA – but his interest for all other things than his studies did take precedence and so the night outs – being merrier the better was his mantra. In fact it went to such an extent that out of genuine concern about his meandering ways a senior resident at YMCA had advised him to concentrate on his studies. Nandi of course didn’t take it well and ended up having an altercation with him.This person was none other than Mr B. R. Panesar the renowned collage artist who had retired as a deputy director of Indian Statistical Institute (ISI) Kolkata.

Gazing at the old magazines which lay scattered, Nandi’s eyes lit up and his face carried a wicked smile. So the plan was to make a paper collage out of those magazines and present it to Mr Panesar – it was more to mock him rather than anything else. Unfortunately the arduous task was handed over to me and I obliged. It took a few hours of work tearing the pages apart, a cardboard and some glue – we both stared at my creation without any opinion – not that we had any. The next day in the morning Nandi went up to Mr Panesar and handed him the so called paper collage. 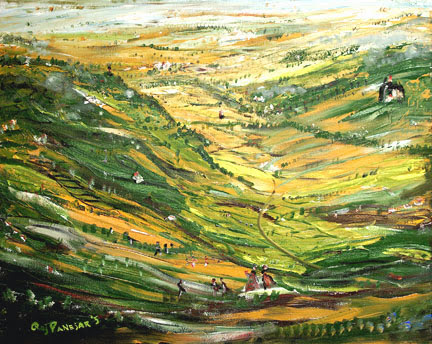 Acrylic on canvas by Panesar

To our surprise Mr Panesar got very excited and asked him who had done it. Once he got to know that I had, he called me and requested me to do some more! Nandi and I came back to our room and the disappointment at it being good, was evident and showed on our faces. But unknowingly for me a new journey had began – of venturing into a new territory; the world of Art.

Later on he helped me in his own little ways to a point where my collages got selected in some of the most acclaimed art exhibitions such as Academy of Fine Arts, Calcutta Information Centre (Tathya Kendra) as well as Gaganendra Pradarshashala.

Mr. Panesar had a humble beginning to start with. Hailing from Punjab he came to Kolkata to study statistics at the Indian Statistical Institute (ISI) and completed his post-graduate diploma in statistics and later on worked as an officer in the Ministry of Planning and eventually retired as deputy director of ISI. Though he had no formal training in art, his interest for painting drew him towards the world of art and as time progressed he picked up the nuances and created magic on the canvas. In 1974 he was made a member of the Society of Contemporary Artists, Kolkata – because of his contributions using collage a medium. The society included stalwarts such as Sunil Das, Ganesh Pyne, Bikas Bhattacharjee, Jogen Chowdhuri, Jatin Das and the likes. 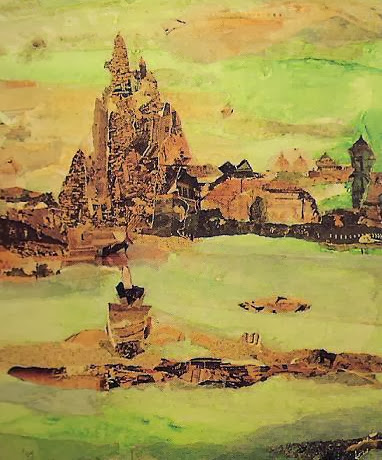 Collage on canvas by Panesar

In one of my interactions with him, he mentioned that – during his years in the planning ministry working as a officer he had to compile and analyse massive information that poured in from various states across India. Those day in computers punch cards were used for data input, processing and storage – they were stiff paper cards which had rows and columns with presence or absence holes – these sequencing of holes represented information. These punch cards were often discarded – either because of wrong information or incorrect processing instruction. Mr. Panesar one day took a few of these back to his place because of the texture and the shape which intrigued him and ended up using them on a piece of canvas – the intended purpose of the punch card got transformed into buildings and houses because of their geometric shape. These were his early experiments with collage. A modernist and an abstractionist, in the Indian context took the art of collage making to a different level.

Well, I guess that talks a lot about the person – encouraging, positive, experimental and above all dedicated in helping people in his own little way. The more I interacted with him the more intrigued I was – as I later got to know that he actually helped Shakila Sheikh, who was a vegetable vendor by profession, to become one of India’s best avant garde collagist. In the international circuits her collages have been exhibited in Paris, Germany, New York and Norway – a journey which would not have been possible without Mr Panesar. 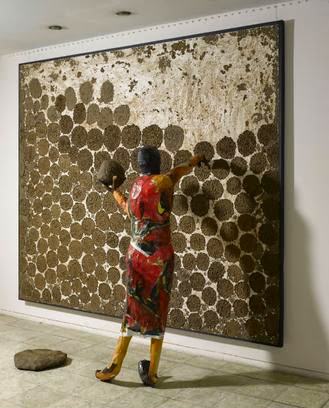 Collage on canvas by Shakila

It’s just not Shakila, me or a host of other artists that got inspired because of Mr Panesar, but his dedicated efforts in putting collage as a medium in the forefront of mainstream art is commendable. It’s a fact that unlike the west in India for some reason collage as a mainstream medium has never been appreciated – it could be because of several reasons: the medium is tough because desired colours, shapes, textures are not available readily; As Indians we tend to restrict ourselves to classical forms – like in music we didn’t cross the Raaga barrier, nor in the area of Dance forms – its still the classical forms and possibly the art appreciators and buyers have been cautious and traditional in their approach. But Mr Panesar’s contributions and tireless efforts has brought back the interest and new artists are venturing into it – like Shakila, Debajyoti Ray.

Mr. Panesar’s low key presence in the art circles of Kolkata can be attributed to his inward nature where he detested self promotion. He made sure all the money that came from selling his collages were donated to orphanages and the underprivileged. It’s sad in today’s world that such a personality never got the attention or the recognition one would expect. His passing away may have gone unnoticed in some vague old age home in the suburbs of Kolkata with practically no support. But in the minds of the people that he touched he has left a legacy that will continue to thrive and the collages will remain as a testimony to his contribution in the field of contemporary art in India.

6 thoughts on “B. R. Panesar – Passing Into Oblivion”