Aditi likes to move, is an expert procrastinator and doesn’t like to talk too much.

Kamaitachi (Sickle Weasel): A trio of invisible weasels out of Tokohu folklore hide in wind flurries. The first weasel would attack a passer-by, the second cut the flesh of the victim and the third seal the skin with medication before bleeding occurs, so that the injury lay within, mysteriously agitating and eating up the insides of the victim.

In my view, Butoh aims at letting the wound bleed.

The first of what we now call ‘Butoh‘ performance took place in 1959 at the Japanese Dance Association. Inspired by Mishima Yukio‘s book `Kinjiki’ (Forbidden Colours) in which one of the themes is homosexuality, the performance shocks the urban Japanese audience. Apart from sexual gazes between the male performers and sounds of moaning on a darkened stage, a live chicken is strangled to death.

The choreographer, Tatsumi Hijikata, now known as one of the founding father of Butoh arrived in Tokyo in 1946 to learn dance. Born in the Akita region in North Japan, where his sister was sold as a prostitute so the rest of the family could survive with the money her sale fetched, where five of his brothers were sent to join the army, the 23 year old Hijikata struggled to survive in Tokyo. He did many odd jobs to continue dancing. He interacted with a lot of artists and was associated with what was considered ‘outside’ society whether in terms of the profession he practiced or the company he kept. He at times resorted to petty criminal activities and worked as a dancer in bars. Many of his friends were homosexual and thus not ‘normal’ in society’s eyes. 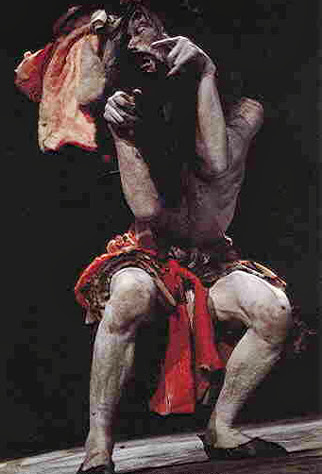 Being a voracious reader, Hijikata was highly influenced by the European impressionists. However, the jazz, flamenco, modern and expressionist dances he learnt, he found were alien to his body. Hijikata felt the need to express and yet was against using the western forms. He searched for a dance that was closer to his roots and came from within his body.

It was around the early 1950’s that Hijikata met Kazuo Ohno, a physical education trainer who was also a dancer trained in expressionist dance under Takaya Eguchi, a student of Mary Wigman. Hijikata invited Ohno to join his dance collective and learn the `Butoh’ that he was in the process of developing. This collaboration according to Christal Whelan “formed what might be thought of as the yin and yang that constitute the totality of Butoh”. If Hijikata who grew up in poverty had a restive energy in his Butoh, Ohno having fought as Lieutenant in a war and witnessing deaths as a prisoner of war contributed a quality of fragility and tenderness to his Butoh. 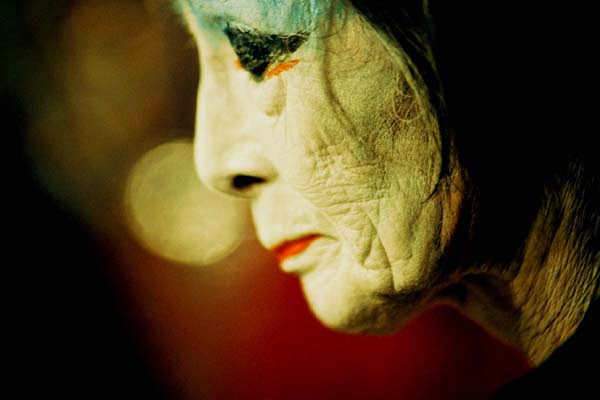 Despite rejection, Butoh survived as a strong undertow to the modern dance happening in Japan. Just as expressionism as a movement came about stronger after the war in Europe, Butoh was born post war Japan. Both Hiikata and Ohno lived through the war. In an environment of American occupation and rapid westernisation, it was a time when the Japanese youth were struggling to find an identity. The war, the bombing of Hiroshima and Nagasaki displaced the Japanese. Many were homeless and crippled and maimed for life. Successive generations were affected due to radiation sickness. With democratisation and demilitarisation, the Japanese people were free to express. While the Japanese classical forms of Noh and Kabuki were beautifully framed with symmetry, Butoh was a riot of emotions that stemmed from the body.

Withering and spasmodic, the animalistic, nude human body bathed in ash. This is an image associated with Butoh. Is it just a show of suffering? How does Butoh help the wound bleed?

It is important to note that Butoh doesn’t have codes or a structure. Though Hijikata termed his dance ‘Ankoku Butoh’ or the dance of Darkness, the Butoh he practiced was very different from that of Ohno. In fact butoh literally means ‘dance step’. In an interview, Ikko Tamura of Dairakudakan says rather than labelling his work as Butoh what is important is ‘continuing to pursue your realities of the moment.’ It is what is nurtured in time, what is hidden beneath it, what is moving. Anything we do could be Butoh, as long as we are consciously discovering it in our body. This excavation, digging deep into the body to unearth movements we never knew existed yet those that were always inside us is Butoh.

In order to trigger the excavation, towards the later part of his life Hijikata used a system called Butoh Fu, poetic word images to guide his dancers. Yoko Ashikawa, his student believes that Butoh is about becoming anonymous. To lose your identity, embody images and transition between images. Butoh Fu is used today as an improvisational tool by many, be it in dance theatre or as art therapy.

Practitioner or spectator, Butoh forces you to see the grotesque. To confront spaces of discomfort and displacement. To witness the stillness in motion of the Butoh body, is it the fracas within that brings calm to surface? Or the calm from which disturbance emanates? Sitting in front of a waterfall, not expecting it to entertain or impress but just be present. Every drop and space between drops, new, ephemeral.

“I said to my soul, be still and wait without hope, for hope would be hope for the wrong thing; wait without love, for love would be love of the wrong thing; there is yet faith, but the faith and the love are all in the waiting. Wait without thought, for you are not ready for thought: So the darkness shall be the light, and the stillness the dancing.” – T.S. Eliot

According to Yoshito Ohno, for Kazuo Ohno, the patience of not starting is the essence of Butoh.

2 thoughts on “Let The Wound Bleed”