A professor of computer science at the Institute of Mathematical Sciences, Chennai, Kamal Lodaya was an editor of the children’s science magazine Jantar Mantar in the 1990’s. Kamal occasionally writes stories for English and Gujarati magazines.

We came to the Circuit House in Tawang looking for accommodation. Janardan Yadav, the caretaker, said that as the chief minister of Arunachal Pradesh had cancelled his programme of coming that week, there were indeed rooms available. He asked us to get permission from the Deputy Commissioner’s office. We waited for Mr Damu, the ADC, outside his office, until a suited gentleman (he was another ADC himself) politely told us he was in the adjoining building and led us there. Mr Damu was fascinated by our plans of watching the total solar eclipse from Tawang, and enthusiastically looked at one of the eclipse goggles Shobha pulled out from her bag. (We later left all the eclipse goggles we had with him for the benefit of schoolchildren.)

While Janardan talked of government officials with respect, he saw Dorjee Khandu, the then chief minister, with something close to awe. “He has poured money into Tawang,” he said with pride, and pointed out all the renovations done to the Circuit House in the last two years. I asked him whether this might not be seen as nepotism (since Mr. Khandu is from Tawang district, the first one to become chief minister of Arunachal) but Janardan waved me away.

“He is spending money in other districts also, he is planning hydroelectric projects, he is building schools …”

In Tawang there appeared to be an additional personal element.

“There are so many people who queue up here to meet him when he visits,” Janardan said, “none of them go back empty handed.”

When we left, Janardan gave us a calendar of Tawang produced by the Arunachal government, where a corner of the beautiful scenes photographed for every month is overlaid with a picture of Mr. Khandu.

Janardan said he would give us good Bihari food, and was as good as his word. We looked forward to the meals at the Circuit House and he looked forward to surprising us every meal with some new and interesting dish. He told us how to find the laundry in the New Market (it turned out that the couple who ran the restaurant promising South Indian dishes also ran a laundry in the back). He suggested the Crafts Emporium for shopping. He told us that we should go to the gompa (monastery) in the afternoon and it might therefore be better to visit the Tawang War Memorial in the morning.

When we did go to the 17th century gompa, we found ourselves in a ceremony in the main hall where perhaps a hundred children, studying to be lamas, were praying. Two senior priests were chanting mantras and some older students were blowing long horns, some were beating drums. It was an interesting form of prayer and we wondered whether all prayers at this gompa had such an aural component.

Janardan strongly suggested that we extend our planned tripto Panggang Teng tso (lake), Shungetsar tso and Taktsang gompa to also include the Gorsam chorten (or stupa) at Zemithang, making it a triangular route.

Tawang is at an altitude of 3000 metres. The road to Bum La (the border with China) immediately starts climbing higher to the ridge towards the north of the town. The Tawang gompa, made of several buildings with bright yellow roofs, looks like a bunch of yellow marbles when seen from the ridge. Soon after the town was hidden by the slope and when we came to a charming little pool covered with muticoloured prayer flags we could only see the ridges on the south side of the Tawang chu (river) valley. On the other side of those ridges lay Bhutan.

Then we were over the ridge and we could see the peaks further north. The peaks overlooking the Panggang Teng lake (known locally as PT tso) show much more bare rock. PT tso is a calm lake on the grassy slopes of which we saw zhos grazing, the bells attached to their necks tinkling as they walked. Like the Eskimos have for snow, the monpa language of Tawang has several words distinguishing various interbreed of cows and yaks.

As far as we were concerned they were all zhos.

Still higher and we reached Nagu La, another mountain pass where huge bare peaks towered over us and the vegetation was distinctly alpine with a lawn-like spread of small pink flowers. Crossing the pass we could now see to the north the Himalayan peaks, covered with dirty white.

Several times along this road we encountered army camps. There were bunkers visible at many places, for instance there was one at PT tso. Climbing some more we came to the picturesquely named Y Junction at 4500 metres. At this point one branch of the road goes to the right to Bum La and the Chinese border. Going there requires an army permit.The left branch goes down to Shungetsar.

A couple of army men sat at Y Junction and made enquiries of us. I wondered what life would be like for them. The temperature was mild in July, but at night it would be around 5 degrees C. Apart from the occasional passing vehicle which provided an occasion for conversation every few hours, there would be no one here even to talk to, until one was relieved by another pair of jawans.

We sat and chatted with them, learning that astronomers from Pune would be at Bum La early next morning to catch the eclipse from there. We told them we were planning to see the eclipse from Tawang itself.

In this barren land with its deep blue skies we had reached half the height of Mount Everest. For me this was the highest I had ever been outside an airplane.

So far the road had been reasonable, but the steep descent from here down to Shungetsar could only be called a track. I could see Sultan, our driver, wondering how he would do the climb in the reverse direction. The lake, on the other hand, was another quiet place, with the surrounding peaks seeming to hem it in much more than at PT tso. It is said to have been created by a landslide during the great Assam-Tibet earthquake of 1950, which dammed the water flowing out downstream.

Denuded tree trunks stand in the lake, in testimony to the forest which once stood by the side of the stream. The epicentre of the great 8.6-magnitude earthquake of 15th August 1950 was in the Mishmi range in Tibet, a little east of the northernmost part of Arunachal Pradesh, about a thousand kilometres from here. The landslide here might have been caused by one of its 6th-magnitude aftershocks, which are also reported to have been destructive.

Next to the lake the Army has built a lovely canteen with large French windows and comfortable chairs and sofas, as also an open-air sit-out which projects onto the lake from which one can see towering peaks on all sides. Sultan told us these buildings were not there last year. We had the usual Tawang fare of noodles and the not so usual cup of coffee.

Climbing a few kilometres out of Shungetsar we came to the Taktsang gompa at a height of 3800 metres. There is a monastery with the same name (“tiger’s den”) near Paro in Bhutan and both are said to have been visited by Padmasambhava (or Guru Rinpoche of Sikkim) in the 8th century CE. The wide-open eyes of the Buddha image are characteristic of a “fixation” form of meditation. What we found more striking was an idol of a Buddha-like figure embracing a woman on his lap. Perhaps it was of Padmasambhava who engaged in tantric practices with female companions.

Behind the gompa we could look down the cliff to the valley of a stream below. We could count 17 hairpin bends. Half a kilometre from Taktsang before going down the hairpin bends is a small settlement of a few houses. After that there was not a habitation in sight for about 40 kilometres until we came upon the valley of the Nyamjang river, on which Zemithang is beautifully spread out.

Near the river we could see the 30-metre high Gorsam chorten a couple of kilometres south of the town. It is a 300 year old stupa and as we reached there we saw the characteristic pairs of eyes painted on all its four sides. The Nyamjang flows from Tibet in the north and we learnt from the Tawang war memorial that it was at the border a little north of here at Khinzemane that the Dalai lama entered India in 1959.

A forty-five minute rest after the long drive from Shungetsar and Sultan was raring to go, because he knew he had to do the 90 kilometres to Tawang before nightfall.

That was a rushed drive in the evening twilight. We zoomed past the breathtaking spray of the Baptenkang (BTK) falls. We did not even enter Lumla, where a White Tara statue is being constructed (with protests from China) overlooking the confluence of the Nyamjang with the Tawang, before the latter enters Bhutan.

This was a pre-figuration of the next morning when a dark cloud covered our (Tawang) side of the valley and prevented us from seeing the solar eclipse at totality, from 6:29 to 6:33 a.m. Whereas on the other side of the valley, as we watched enviously, the peaks were lit up until the moon’s shadow covered them with darkness.

As the sky got dark we saw the planet Venus overhead.

Suddenly we had a fantastic audio accompaniment from the Tawang gompa where the monks started going strong with their trumpets and horns and drums. What we had seen on the earlier evening had been a practice session! And there were any number of cries, whistles and catcalls from the town.

As totality ended we saw the shadow lifted from Tawang. Soon the dark cloud went its way. Mr Damu called to tell us how angry he was at the cloud. Janardan Yadav emerged from the Circuit House in his trademark blue sweater to tell us tea was ready. 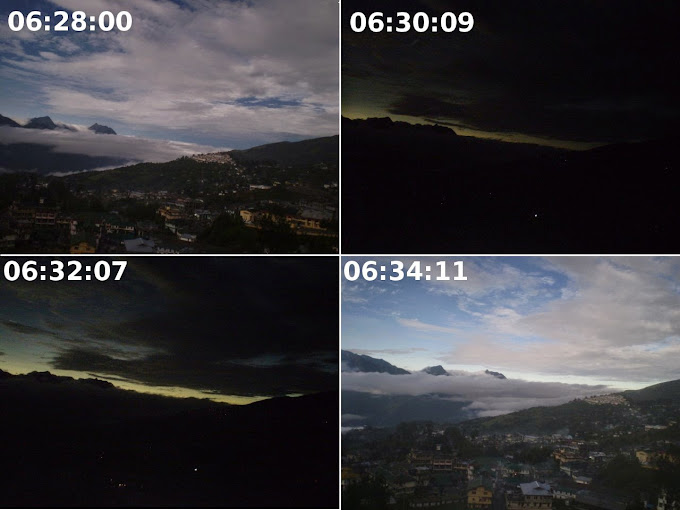 I got talking to a lama and I asked him what the drums during the eclipse had been about. He explained that the Sun is our friend, it helps us every day, and when it is in trouble, it is our duty to help it out. I suspected this was the story of the demon Rahu in another guise, but at least it was sought to be scared away with noise, instead of the Hindu idea of protecting yourself by having a bath. I was reminded of a song Kin sang preet karaan (I was to hear it sublimely sung by Mahesha Ram, a Meghaval singer from Jaisalmer, at the Kabir festival in Bangalore). It is a Buddhist song about a bird which does not wish to abandon its friend, the tree, during a forest fire, and tries to douse the flames by carrying water from a nearby lake with its wings.

One thought on “Eclipse At Tawang”