Biswajit is a journalist and associated with democratic movements. 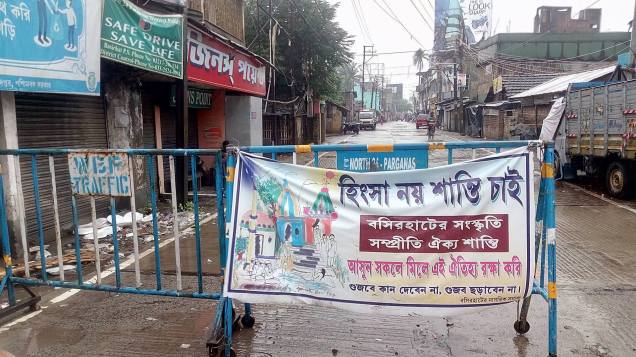 The communal cauldron in Bengal’s Baduria-Basirhat bordering Bangladesh is no more at the boiling point, though embers are still glowing. This probe into the anatomy of the sectarian strife, latest in a series that have taken place from Kaliachak in North Bengal’s Maldah to Dhulagarh in Howrah close to Kolkata since last year indicates a method in the madness that suits BJP-RSS politics of Hindu consolidation wholly, and Trinamul Congress’ treatment of Muslims as a vote-bank, at least partially. Indications from the ground are enough that the Sangh Parivar will intensify its drive for religious polarization while ruling Trinamul will facilitate it by default at the expense of fragile social fabric till the 2019 general election.

The pattern emerging out of the latest flashpoint in the state points to deep inroads made by the votaries of competitive communalisms of both saffron and green hues, particularly in areas close to Indo-Bangla border where demographic balance has remained uneasy for long. As the genies of communal passion get released to enjoy their dance of death and destruction, it’s not always easy to bottle up them even for their masters. The weeklong frenzy in the frontier area in early July is the latest example. These forces are likely to gain more social and political space if their mutually complimentary roles in igniting the frenzy are not exposed and countered effectively by the voices of sanity and humanity in both communities in order to fight the worst of the polar politics.